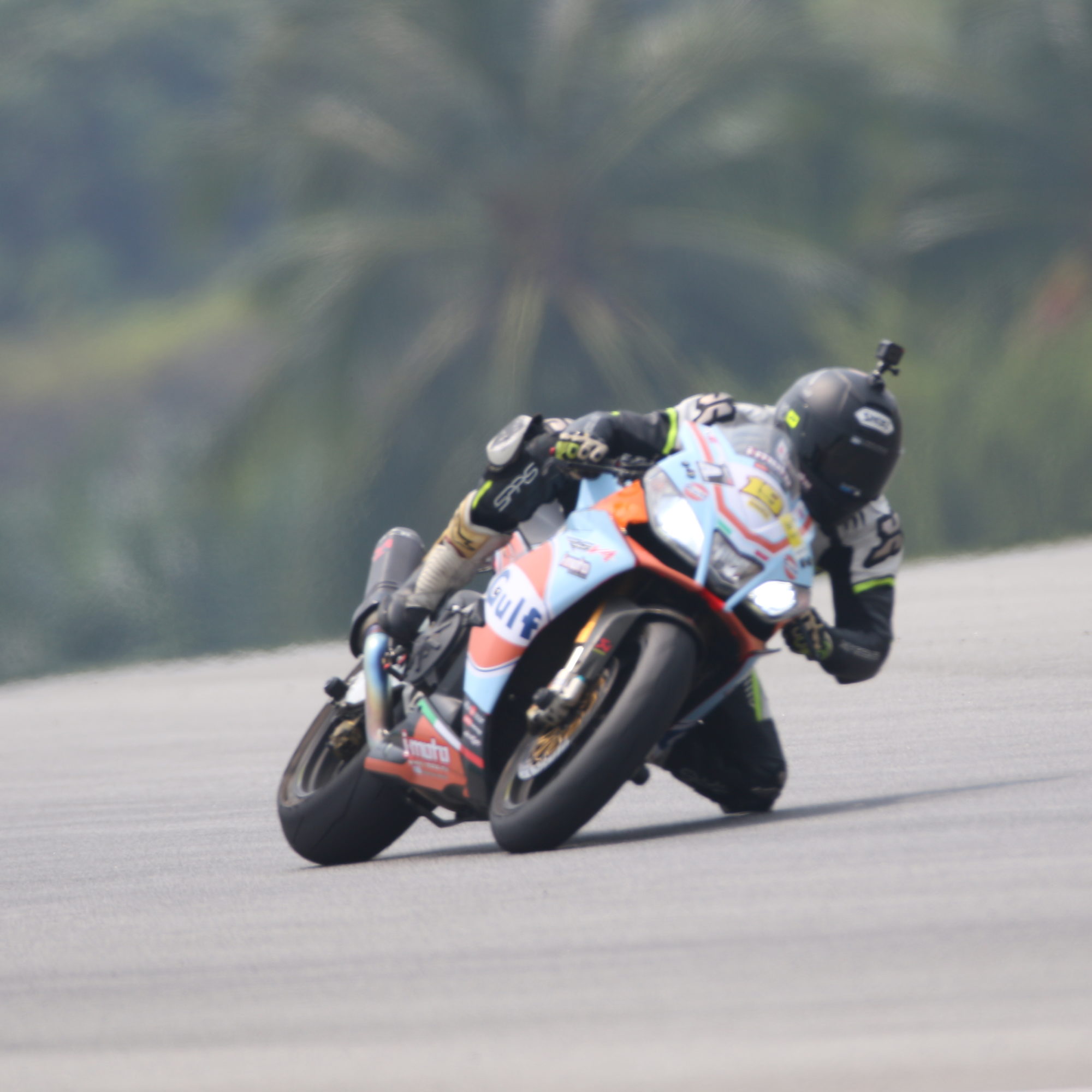 Sexy ShiReen is what I name the newly launched CFMoto 250SR, which we are one of the first to review Chinese’s entry to the highly-lucrative segment of 250cc Sportbikes Segment.

The recently, launched 250SR from CFMoto may start to “shattering” perceptions about Chinese-made motorcycles, previously reputed for low quality, reliability and styling. 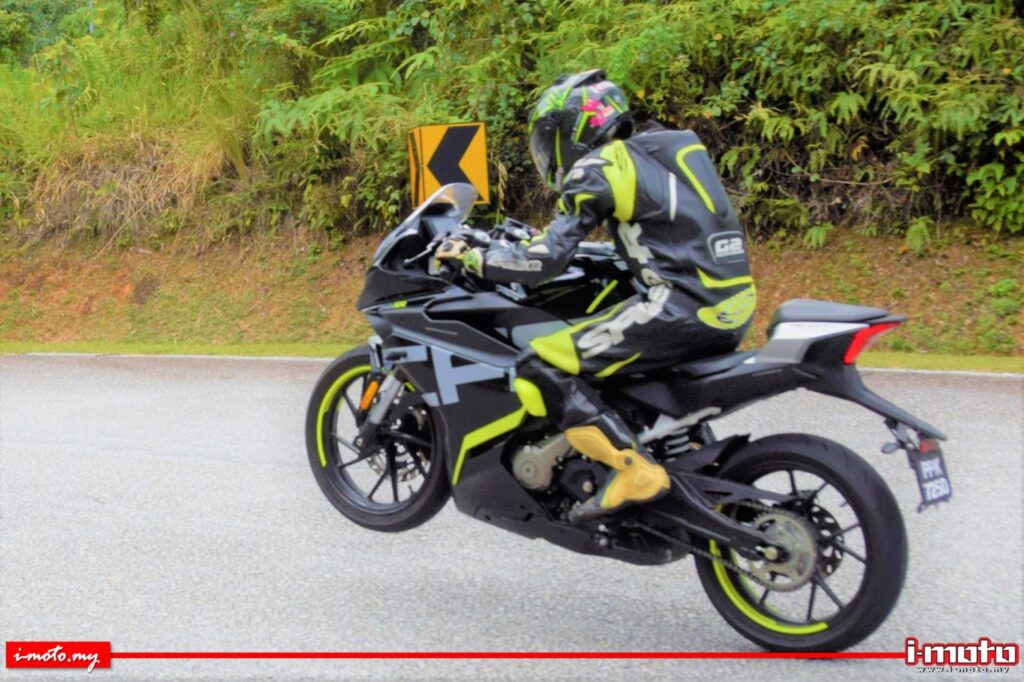 Establish in 1989, CFMoto based in Hangzhou, China, however, has worked hard to change that perception, by releasing a slew of decidedly un-Chinese models that could pass for high-end Japanese or European motorcycles.

With the powertrain shrouded in plastics, the 250SR could pass for a larger Supersports bike. 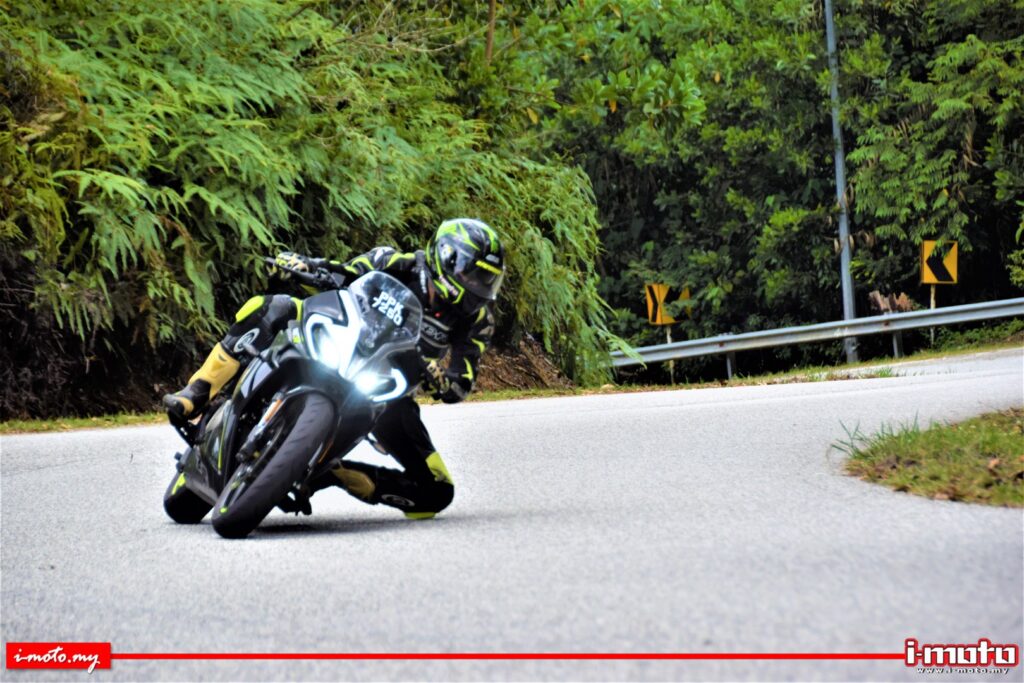 Backed with an inked a deal with KTM, agreeing to produce the Austrian outfit’s bikes for the Chinese market. The relationship has also enabled CFMoto to utilize KTM’s designing house Kiska. 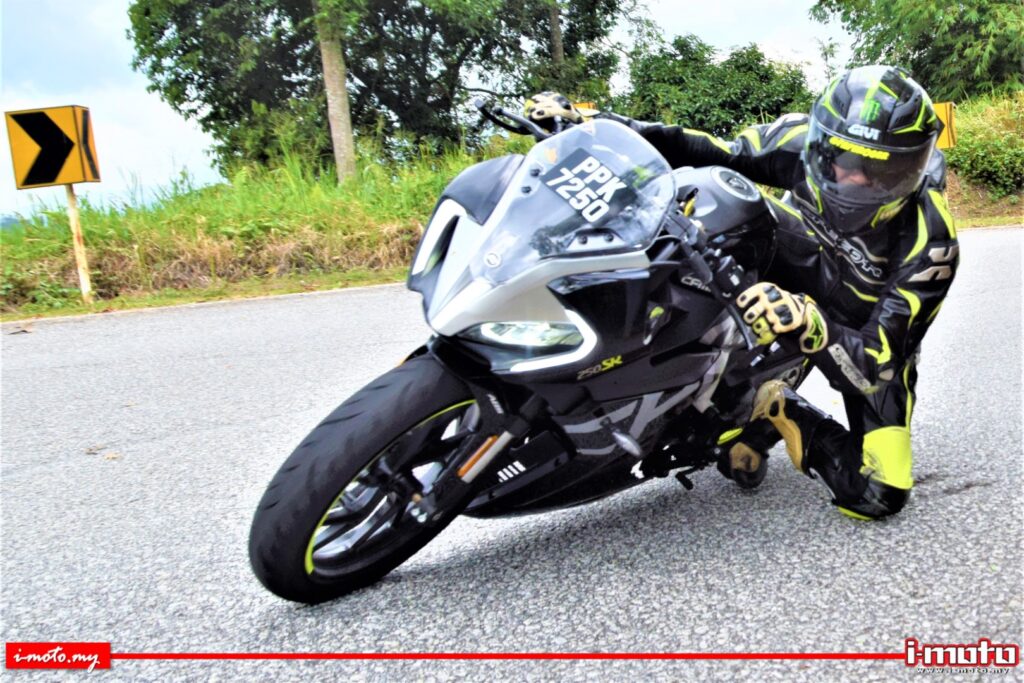 CFMoto will produced and fit the KTM LC8 V-Twin in one of CFMoto’s upcoming streetfighter model. CFMoto is the first Chinese brand to successfully compete at the Isle of Man and finished fourth in the Lightweight class in 2016 when Gary Johnson further demonstrated the competency of CFMoto’s bikes. 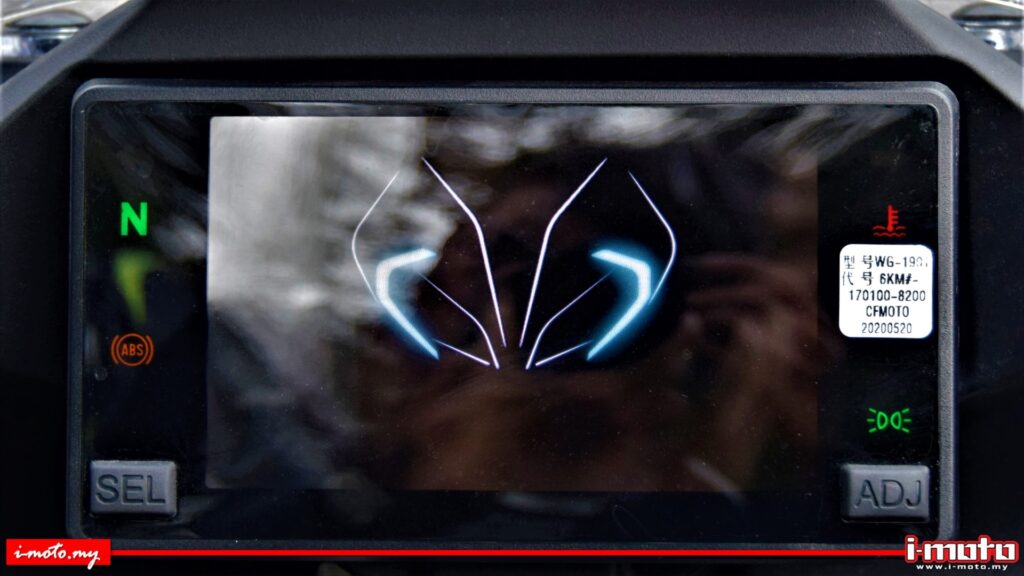 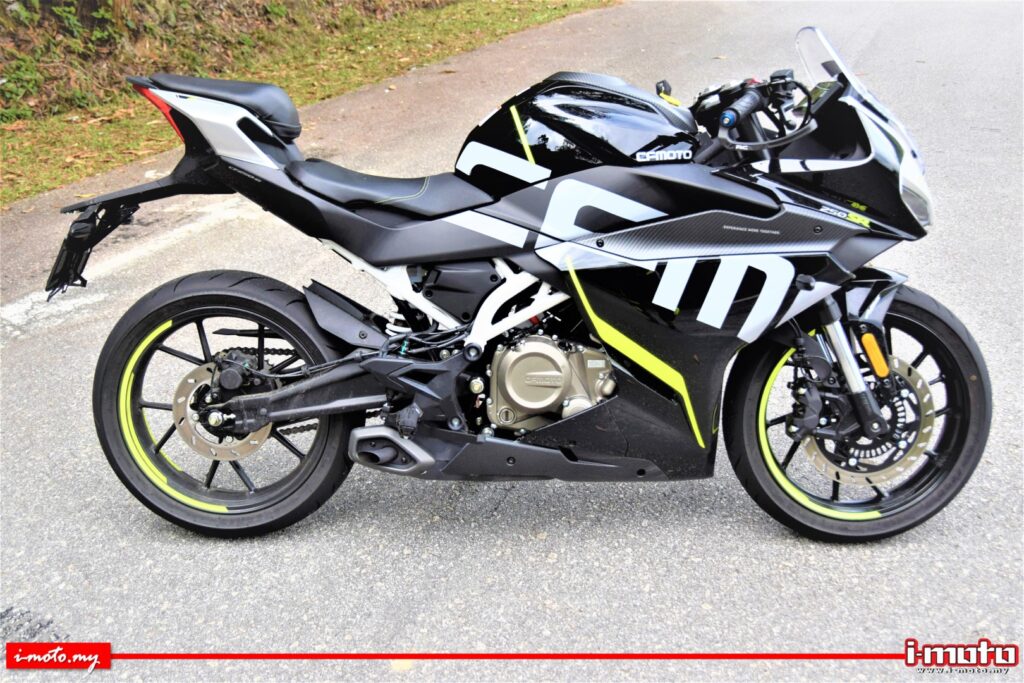 Kiska focus on European design while many Chinese manufacturers base their designs on existing popular models from mainstream companies like Honda and Yamaha.

CFMoto has taken a much more involved route with the design of its new 250, tasking KTM’s go-to design outfit, Kiska, to pen the bodywork on the SR.

Dressed in a full fairing, the 250SR’s front-end houses full LED lighting and boasts an aggressive and modern nose, looking like a cross between the Ducati Panigale, Aprilia RSV4 and Suzuki’s latest GSX-R1000. Also the Limited Edition livery, I could say “borrowed” from the Ecstar Suzuki MotoGP squad.

Though it uses the same platform as the 250NK, the full-faired 250RS is markedly more attractive than its naked sibling.

The front fairing is matched by an equally flashy and angular tank cover with pronounced knee-dents and a carbon fiber top-cover. A sporty tail section is suspended high above the wide rear-wheel, complete with tunneled-out sections on either side of the race-style bum-stop pad. Along with the nose being reminiscent of the GSX-R, the 250SR is adorned in a livery that replicates the Ecstar Suzuki MotoGP livery though.

The 250SR is largely based on CFMoto’s existing 250NK naked roadster model. The SR and NK share the same tubular-steel chassis, however, the full-faired model gets an up-spec-ed aluminium swing-arm linked to an adjustable mono-shock. The SR nonetheless totes the same wheelbase as the NK at 53.5-inches (1,360mm). At the heart of the SR is the NK’s liquid-cooled, quarter-liter single that makes 16.25ft-lbs (22Nm) of torque, 26hp, and is paired with a six-speed gearbox. The SR’s engine comes preloaded with dual maps; Sport; and Touring.

A single rotor ABS dual-piston caliper provides the 250SR with spongy stopping power. During the review I immediately took out the ABS sensor to have more precise bite and feel from the front brakes.

Like the NK, which comes from the factory with budget J.Juan brakes caliper. The SR come with full-color TFT display. Front upside-down forks remain similar to the NK.

The CFMoto 250SR in all its race-ready goodness is on the right path, CFMoto has done a stellar job of altering perceptions and proving the Chinese can be contenders in the high-end motorcycle market.

With bikes like the 250SR, there is a much greater chance of attracting new riders with dropped sexy and affordable entry-level models, CFMoto 250SR starts from RM15,888 (Standard Model Black) to RM17,888 (Limited Edition) excluding roadtax and insurance.

KTNS Holding is the official CFMoto distributor in Malaysia 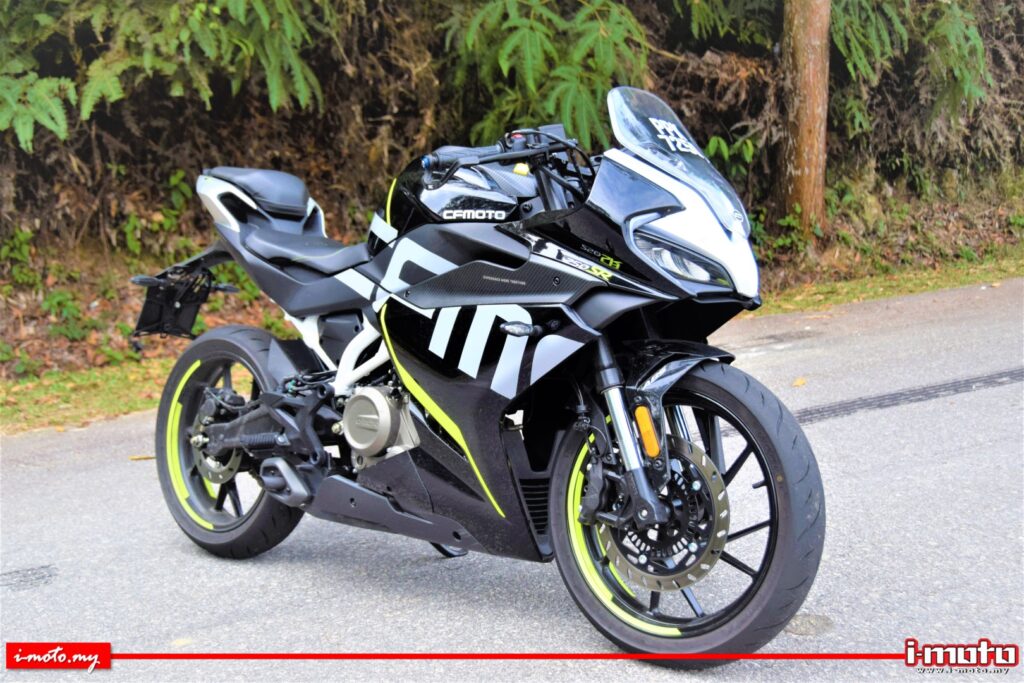 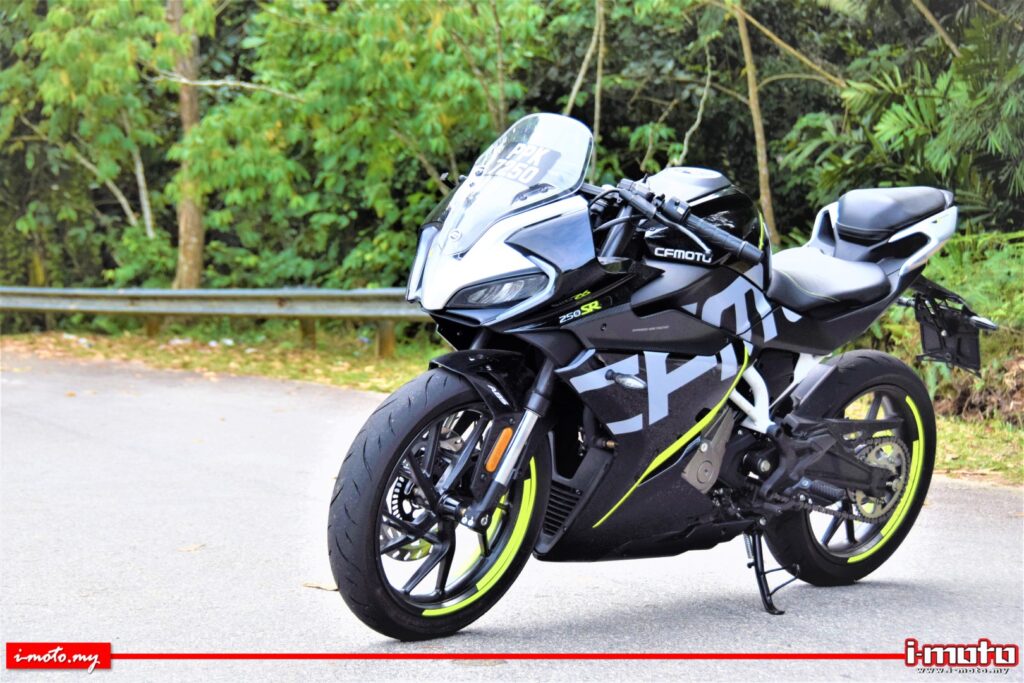